Boy, has it been a long while! I have to say, I’ve been in a bit of a funk the past month when it comes to getting off my butt and taking photos for pleasure. But, a camping trip to Algonquin Park last week was just what I needed to finally pull off shots I’ve been looking forward to trying for quite a while.

I give you pictures of the Milky Way from way the heck down on Earth, in Algonquin Park to be exact, where the light pollution is low. 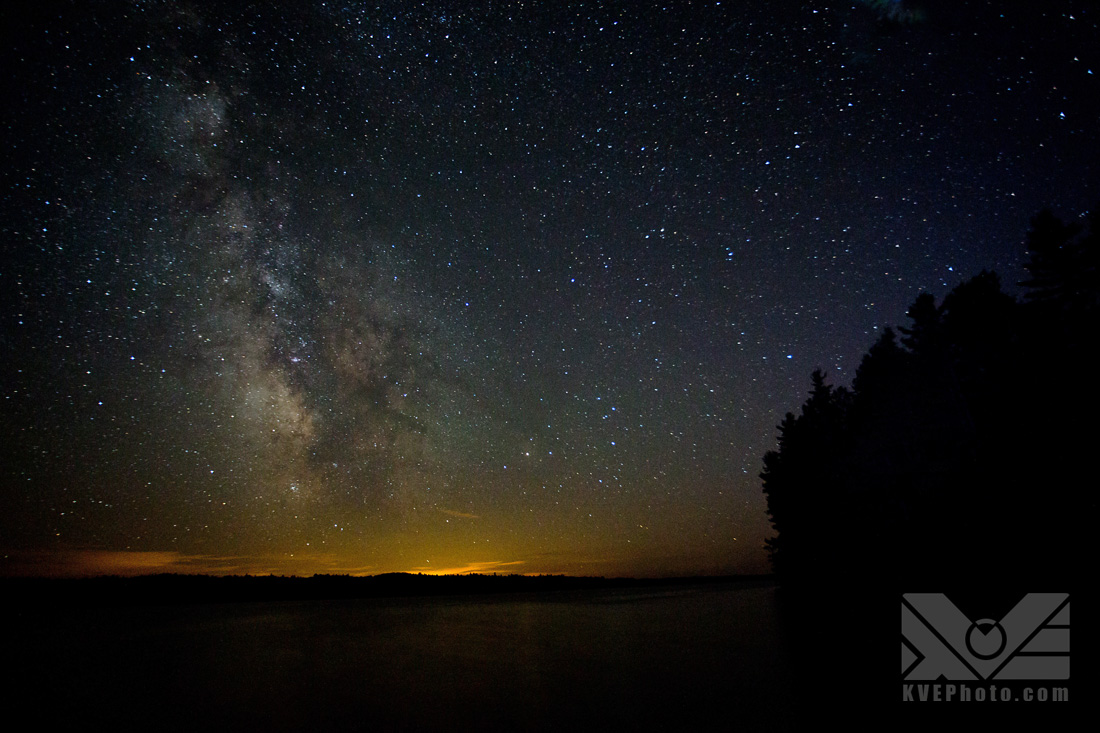 I can’t tell you how long I’ve been hoping to do shots like these. It’s tough because, to get shots that aren’t terribly noisy (though these have some noise), you need a pretty damn good sensor. A wide angle lens is also helpful, and very little light from cities or even towns is also a must. You can actually see some light pollution at the bottom of the horizon here, from some very distant town. Thankfully it only added to the photo here. 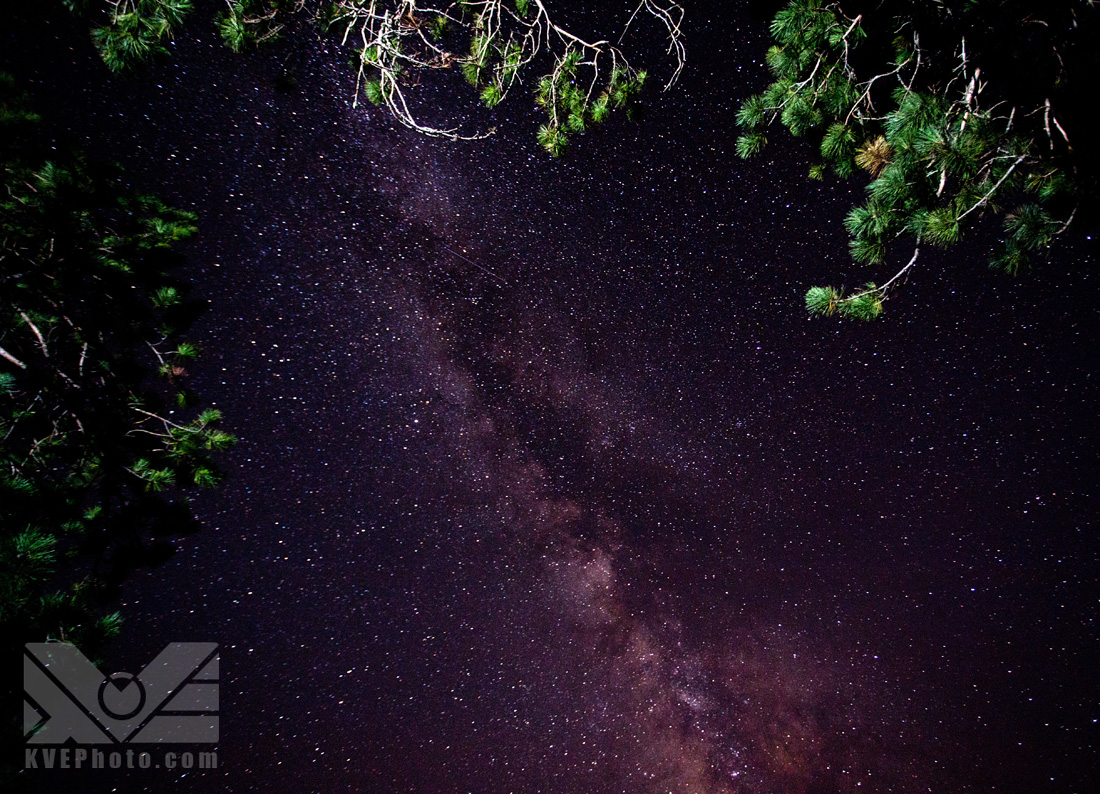 To accomplish these shots, I had a long shutter speed of about 25 seconds, a tripod for stabilization, a 17 mm lens and iso of about 5,000 or so (hence the noise). All that means is I pretty much maxed out my camera’s light-gathering capabilities (within reason) to see a bit more than I could with my own eye. 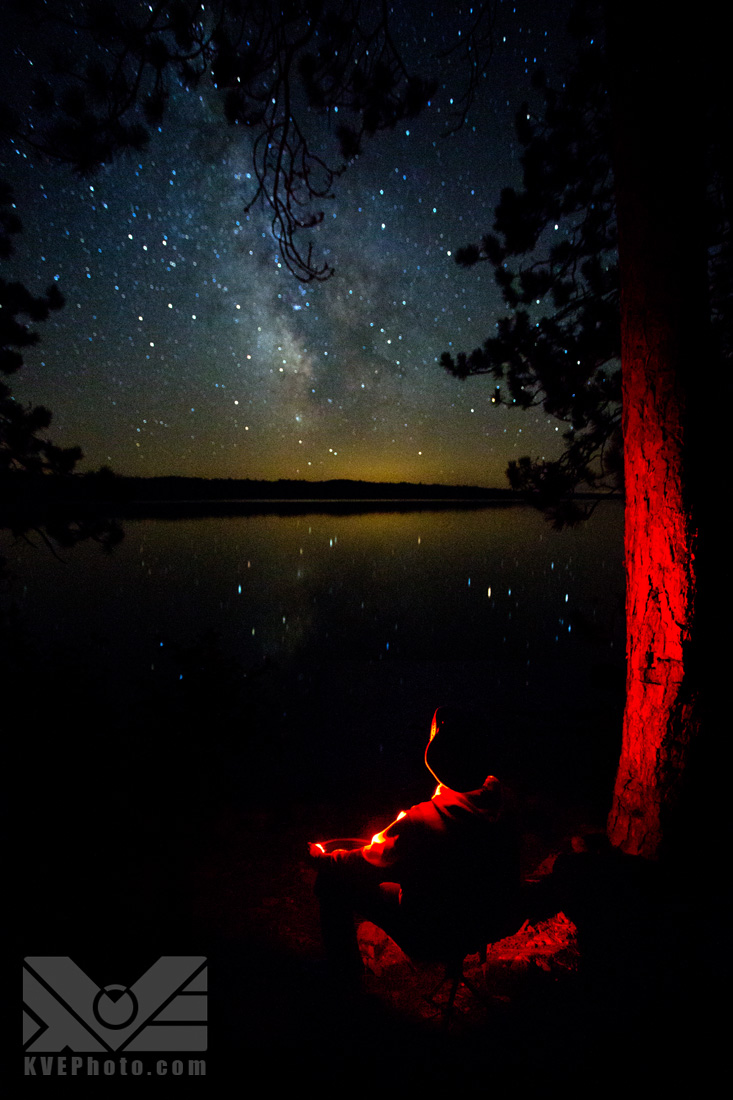 While my first picture was just a shot of the Milky Way on its own, imagination really comes into play when you try and add your own elements, even if it is yourself in a chair with a red LED pointed at you 🙂 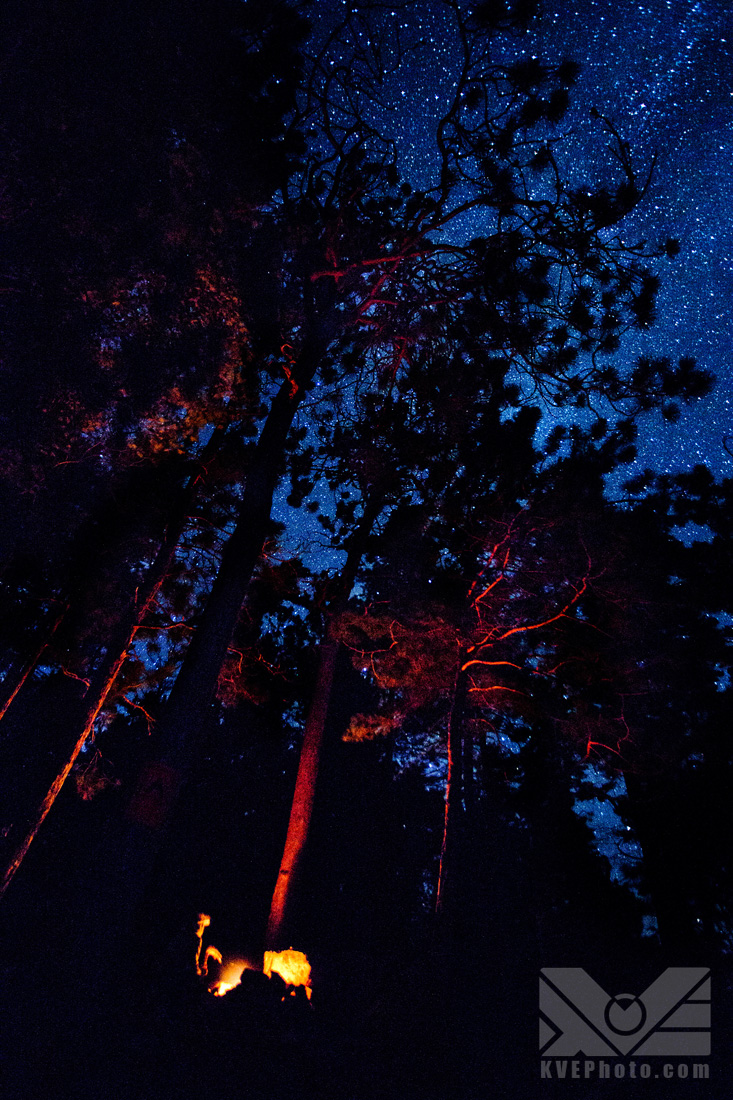 (That’s our fire at the bottom left). Another really difficult part about getting these shots is getting the focus right. There is so little ambient light that the automatic focus doesn’t have a chance in hell of focusing, so you have to do it manually. But you can’t do it by looking through the viewfinder either because you can’t really see anything! 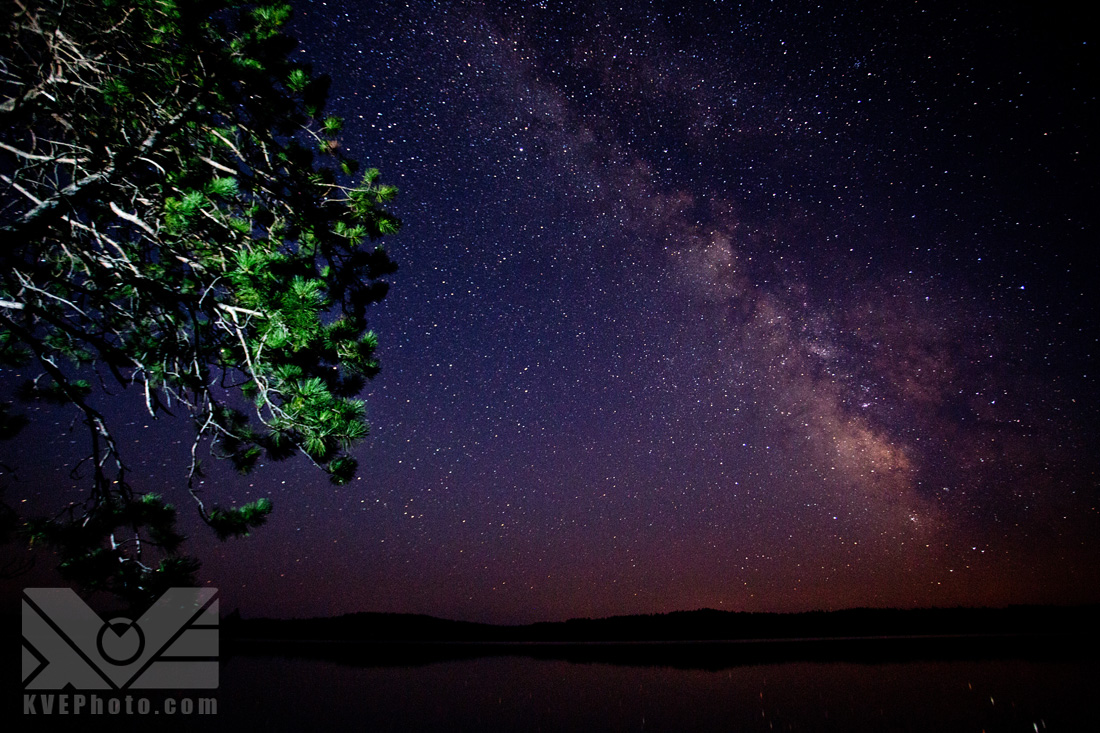 So what you’ve got to do is focus in the day time at some clouds way off in the distance, and look to see where your focus ring has gone. That’s where you need it to get sharp shots of the stars. I didn’t actually do that for all of my shots, hence the blurry sky at times. 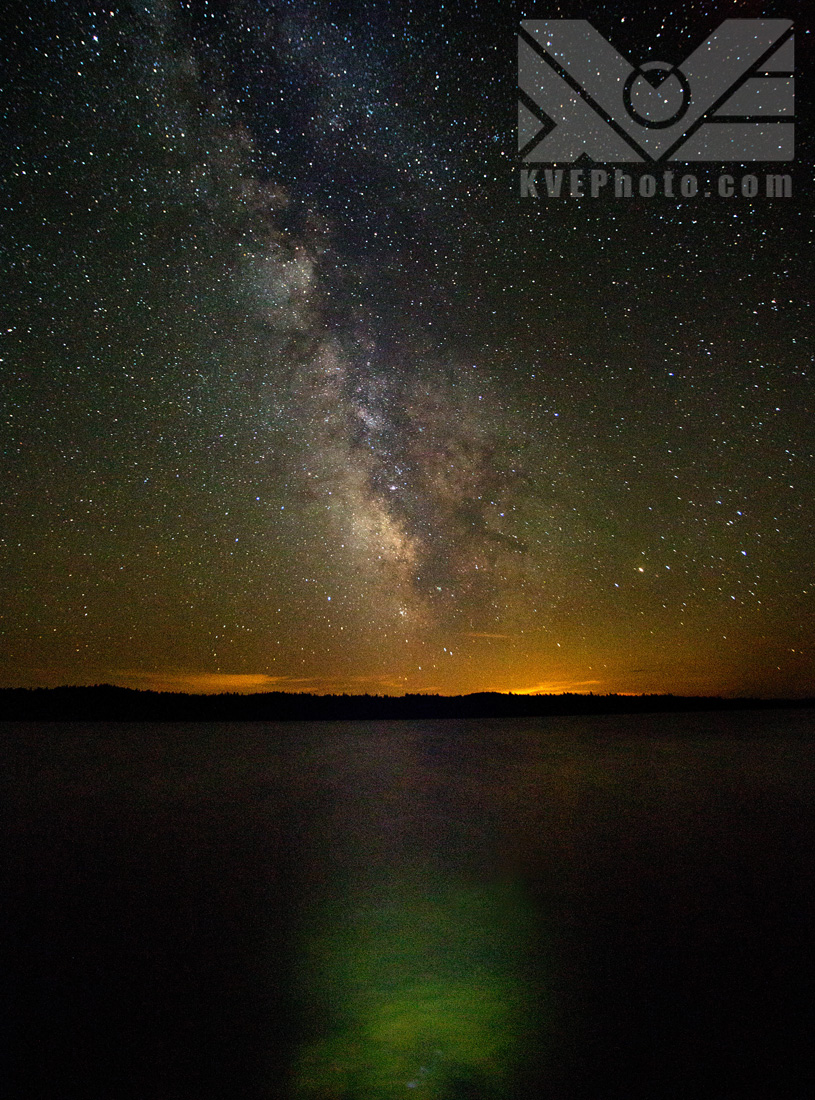 With this shot, I lit up the lake a bit with a white LED to give the illusion of a pathway to the stars. I used to dislike adding artificial elements to a shot, but now I find it’s a chance to add your own imagination to a shot in a new way, and put your own stamp on the image. 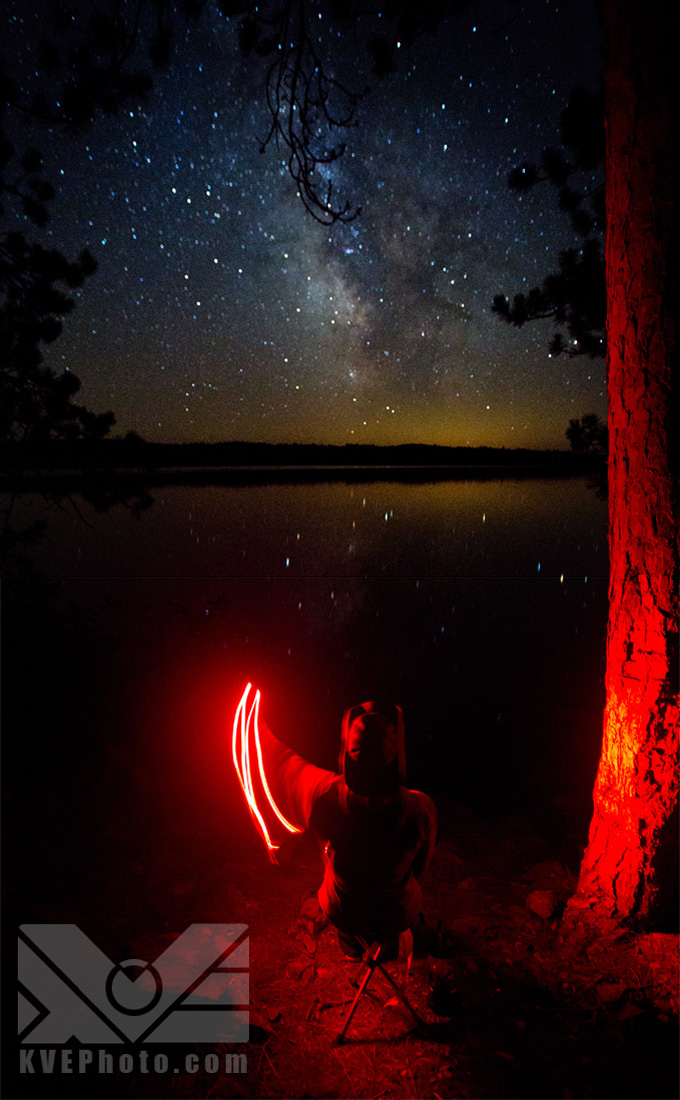 This shot just may be my favourite. The sky isn’t sharp, and I wasn’t even going for the light-streak effect I got. But after I looked at the shot later, I realized it looked kind of like a conductor, so I named it Cosmic Conductor! (Because alliteration rules). Also, for the record, the model is my fiancee, and yes, we are wearing the same hat.

And there you have it, my very first Milky Way photos. I was super happy to do these, and it is a ton of fun to see what you can get with a bit of editing. The universe is so cool!

In the next week or so I will be posting the daytime shots of Algonquin Park that I managed to take, so stay tuned!

2 Comments for Stars at Algonquin


They are great Adam. They would work very well with a story. And by story I don’t mean news. How inspired do you feel?


Do you mean a story about camping and taking the photos, or something more creative? If so, I’m already working on a sci-fi novel:)