The kitten, then and now

In case you didn’t know, I now have a cat. His name is Maurice, or Moe for short. Rhymes with ‘No,’ which we tend to say a lot. But really, he’s a wonderful and affectionate cat, not unlike many pets.

And like many pet owners, my wife and I love taking photos of him. I mean, come on, he’s so damn cute! So, despite the profusion of cat photos on the internets, I thought I would add some of ours. Here are photos of Moe from when he was just a couple months old, and now, at about nine months.

There are lots of them … enjoy! 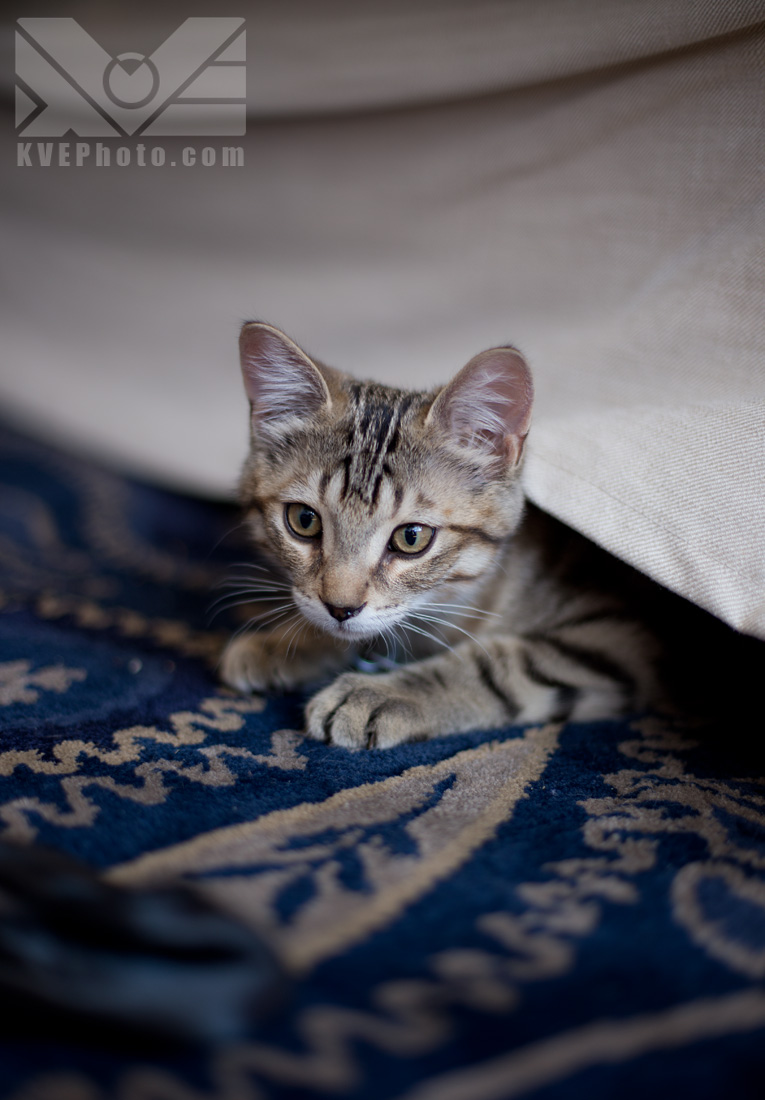 Here he is, just a tiny thing and seemingly timid, but oh no, that couldn’t be further from the case. 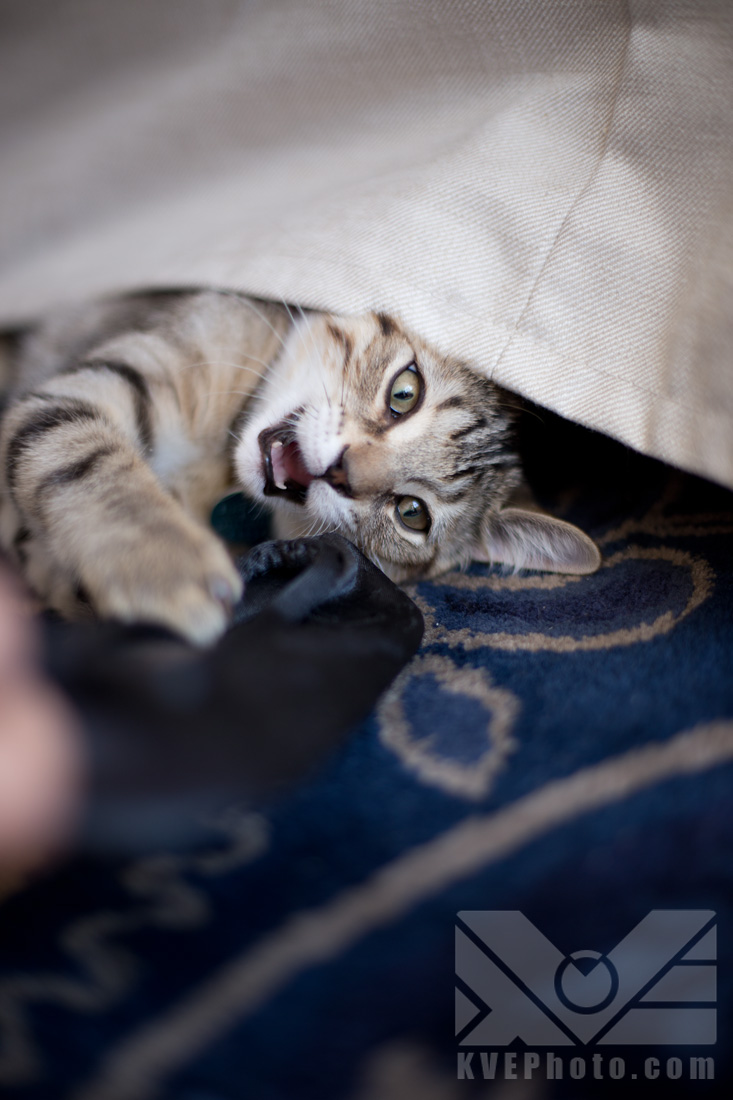 ‘Grrrr, roar, rrrrrr, rarrrr!’ And there you go, the semi-vicious animal we have come to know and love. (We are the proud owners of many scratches).

If you are wondering how I got all those visually pleasing blurry sections in the photo, there is a trick to it. It’s called f-stop, which is the amount that a lens has its iris opened or close. The wider the iris, the more bits are out of focus. Oh, and the out of focus bits are called ‘bokeh.’ Not sure why. 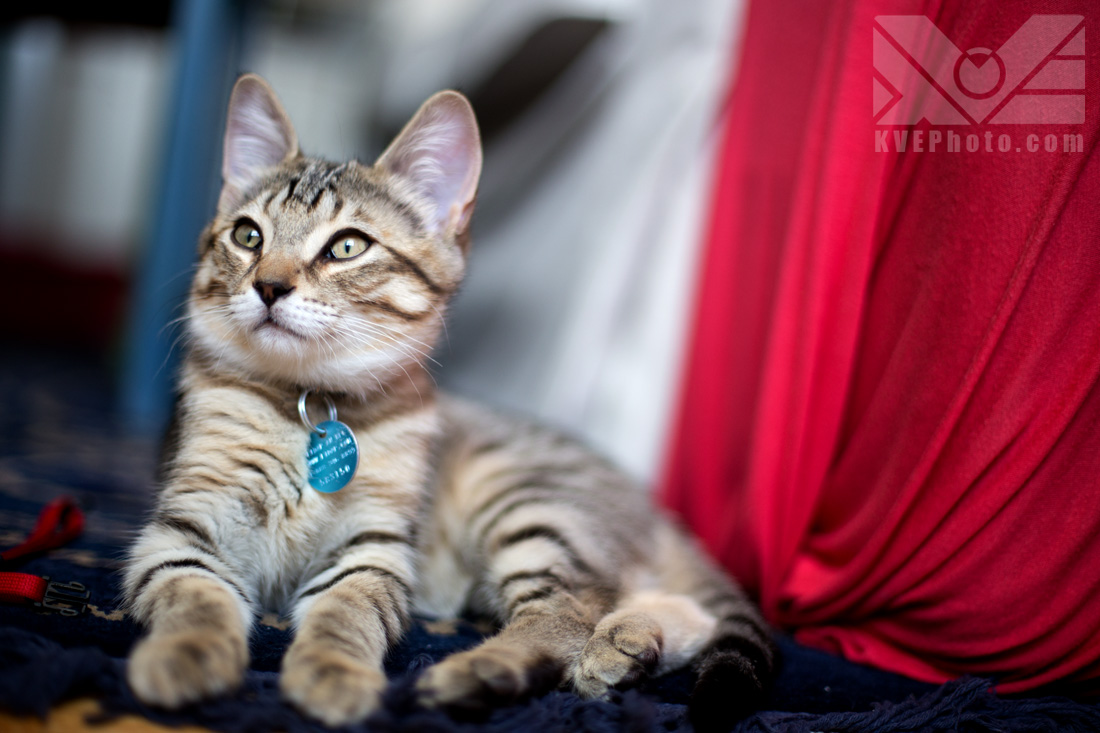 Getting ‘bokeh’ is something that a lot of amateur photographers seem interested in achieving. You basically need to tell your camera to set the f-stop number as low as possible, and that will make more things in your photos blurry. There are plenty of other things to keep in mind to get good bokeh, but that’s how you start.
At the same time, bokeh does not a photo make. Here I balance the blue and red colours in the photo, and sandwich Moe in between, and slightly to the left. 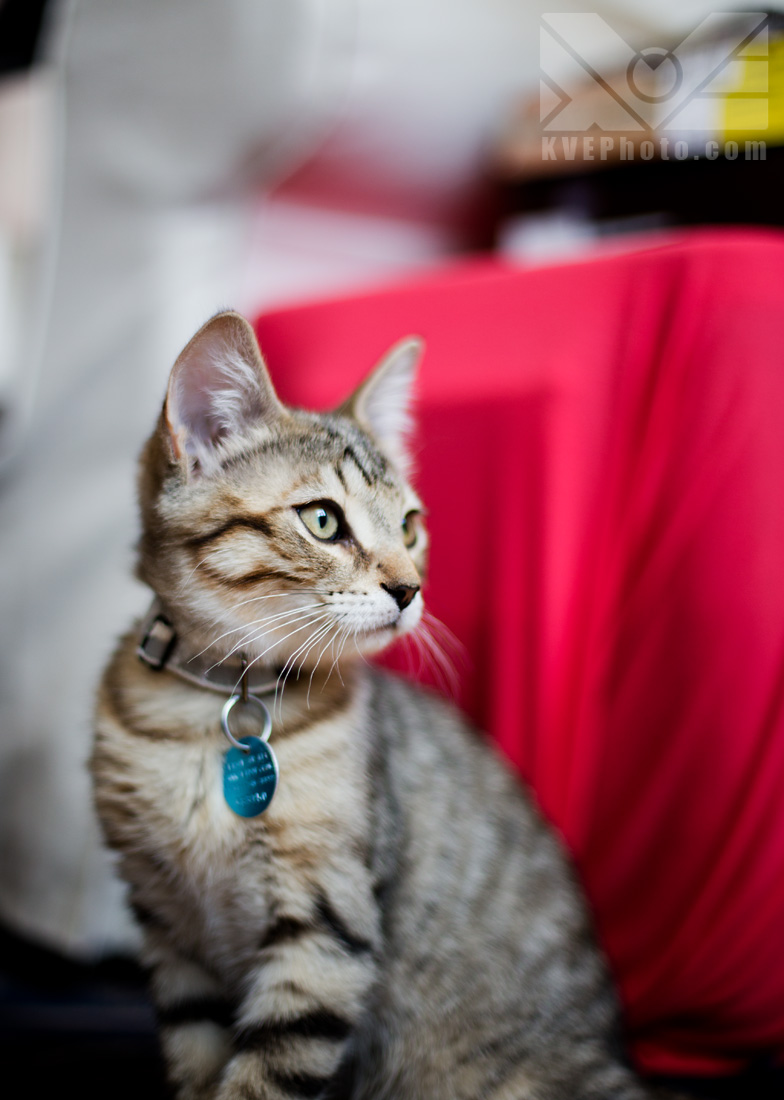 Yes, our little Moe can look rather regal at times, especially by emphasizing the dramatic light, keeping nice dark areas in the shot and having only a few white areas. 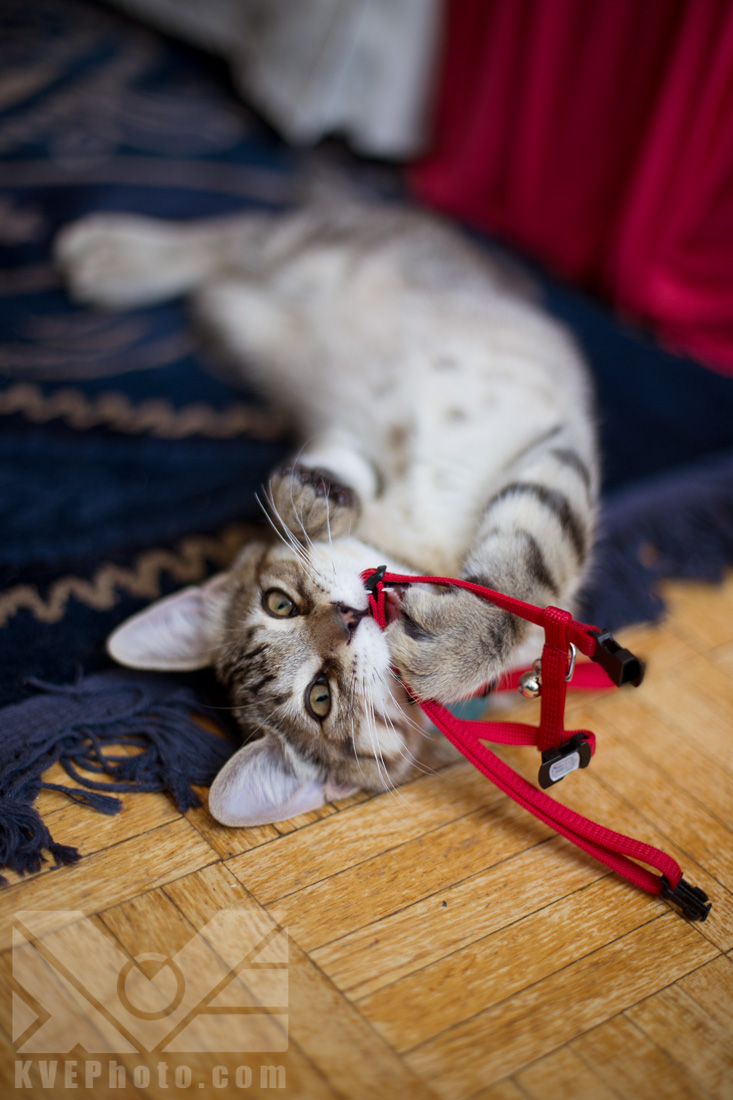 But you wouldn’t want to only take dignified photos of your pet. 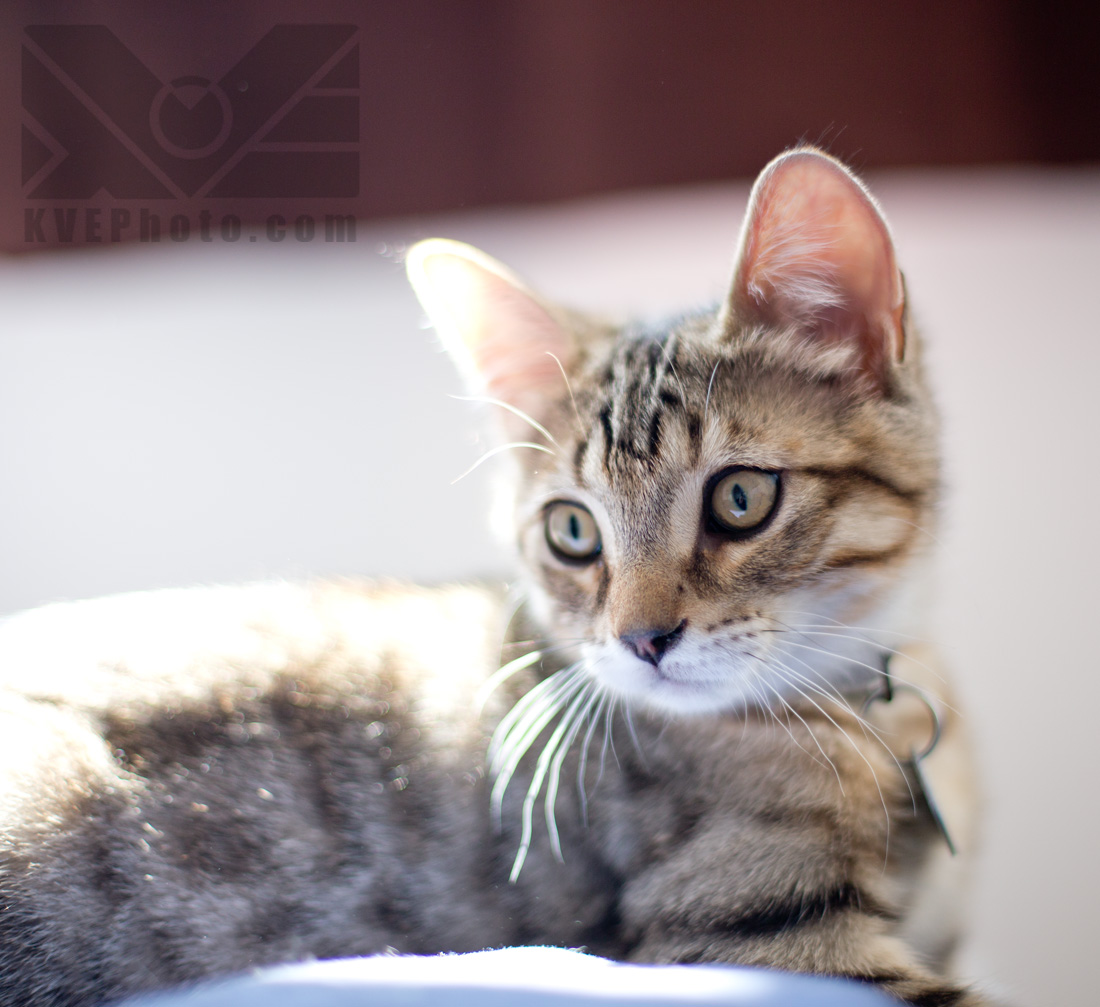 We rather love our little goofball, and it’s been interesting to see him grow up, though it’s never as striking as when you go from a photo like this … 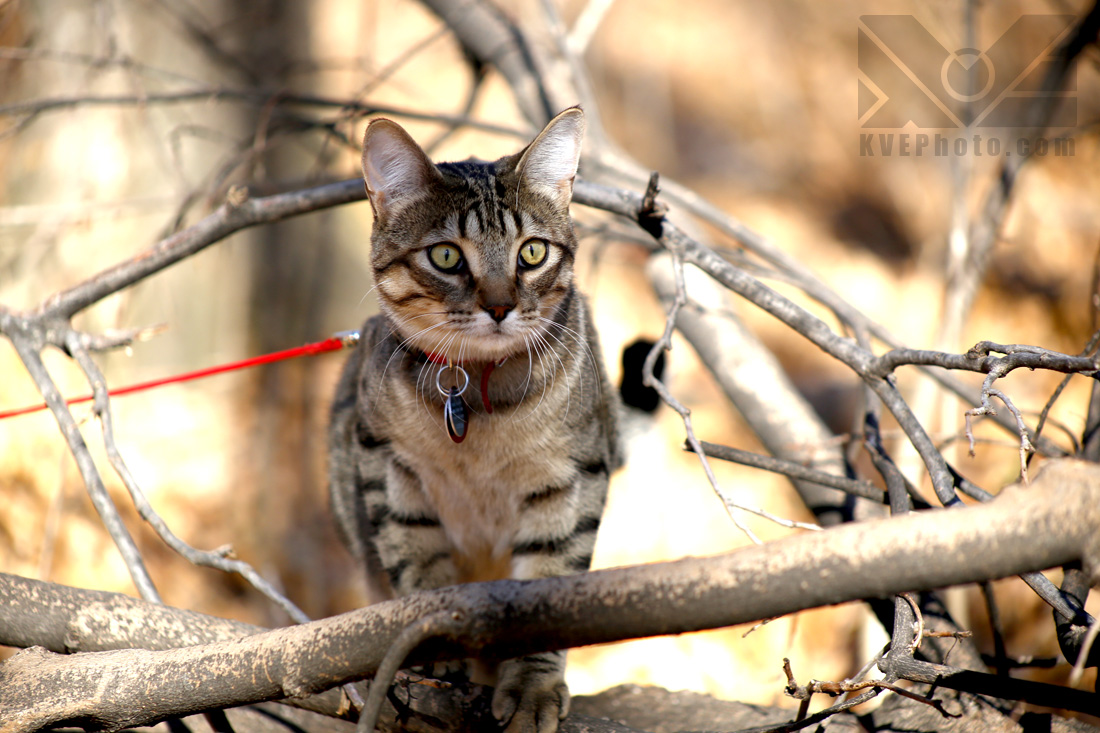 … to one like this. He’s not quite fully grown yet, we think. And he is very interested in exploring forests, so long as there is enough cover. This was his first time out with the leaves off the trees, and he was not happy about being so exposed. 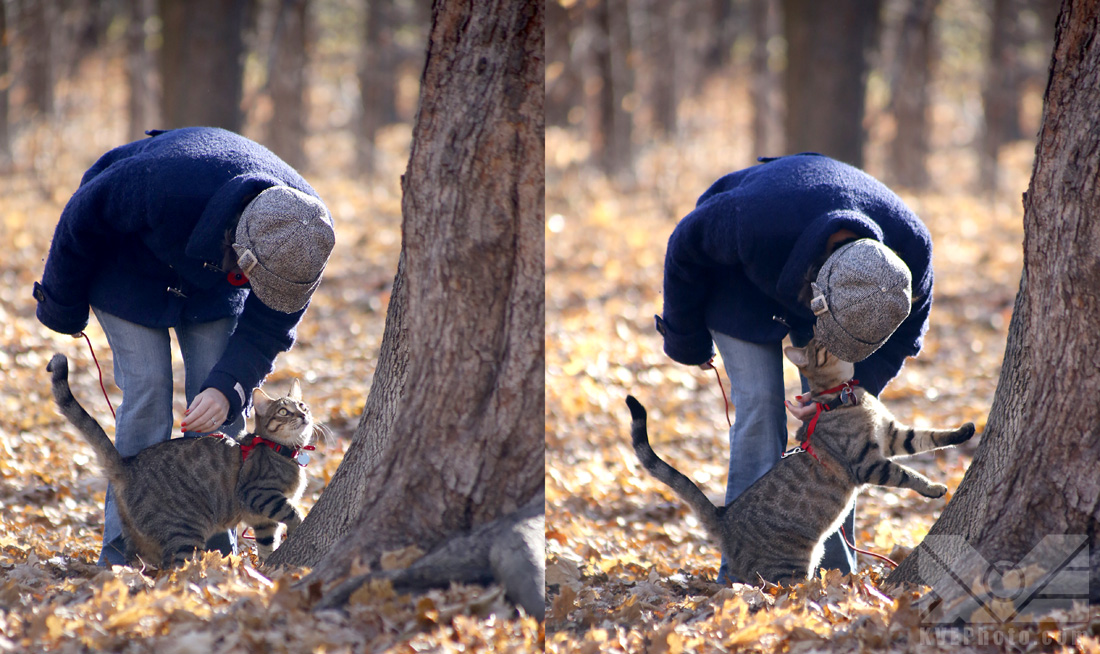 There was a lot of this going on that day. Whenever he is unsure about his safety, he will run up to one of us and get affectionate, or even hide between our legs or sit on our laps. 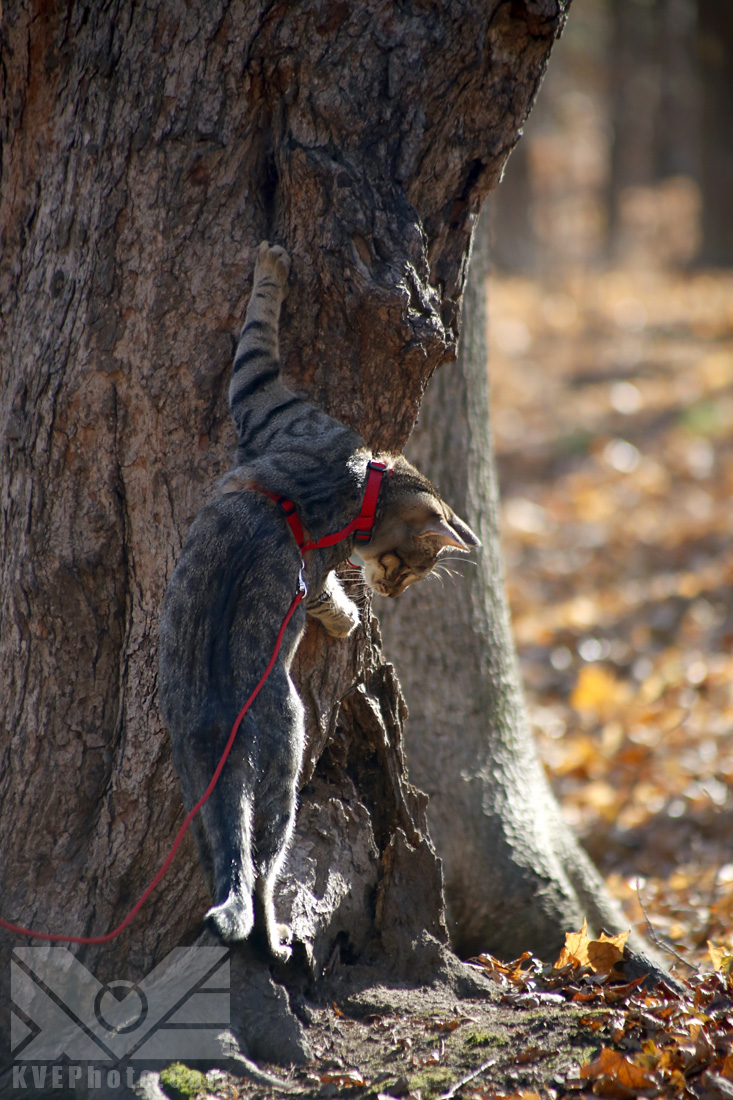 As for trees, he’s not quite sure yet. He’s climbed up on a few, but he’s still wary of them.

He’s not above rubbing his face on just about anything, however. 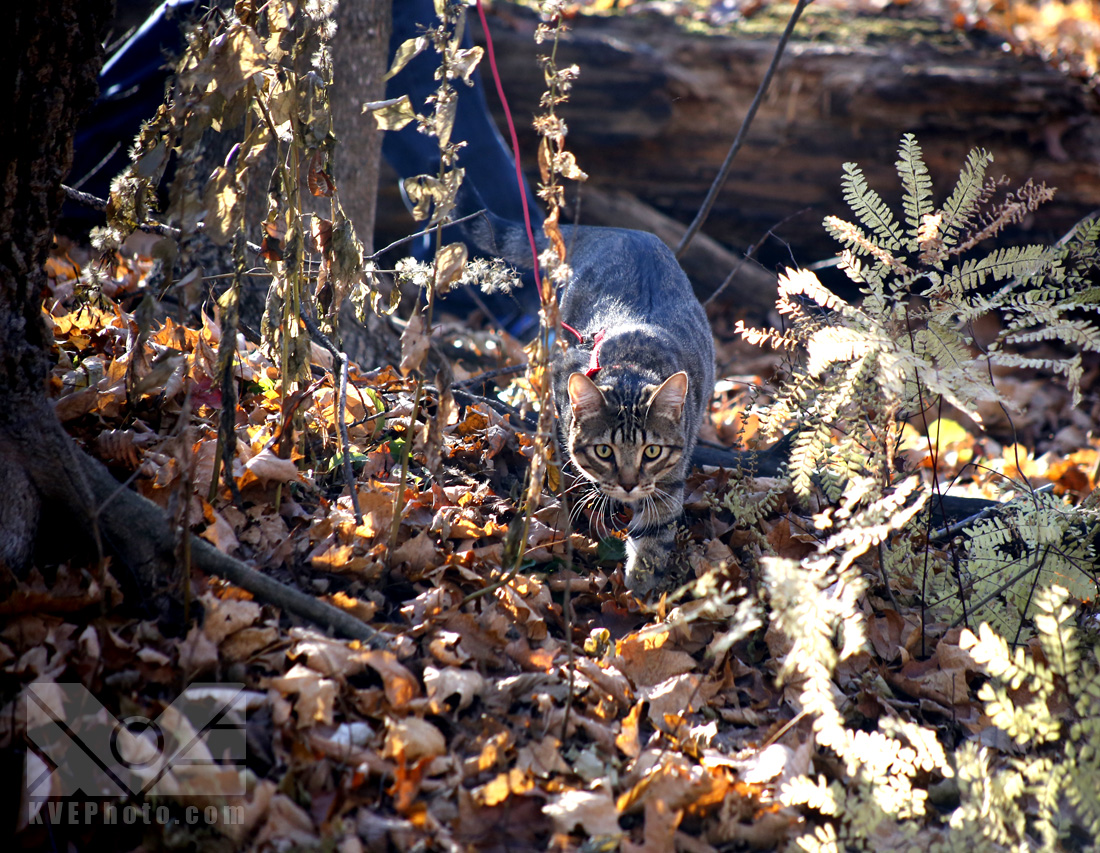 And there are other times when he looks just like a fearsome tiger! Albeit with a bright red leash on … kind of ruins the affect, ey? 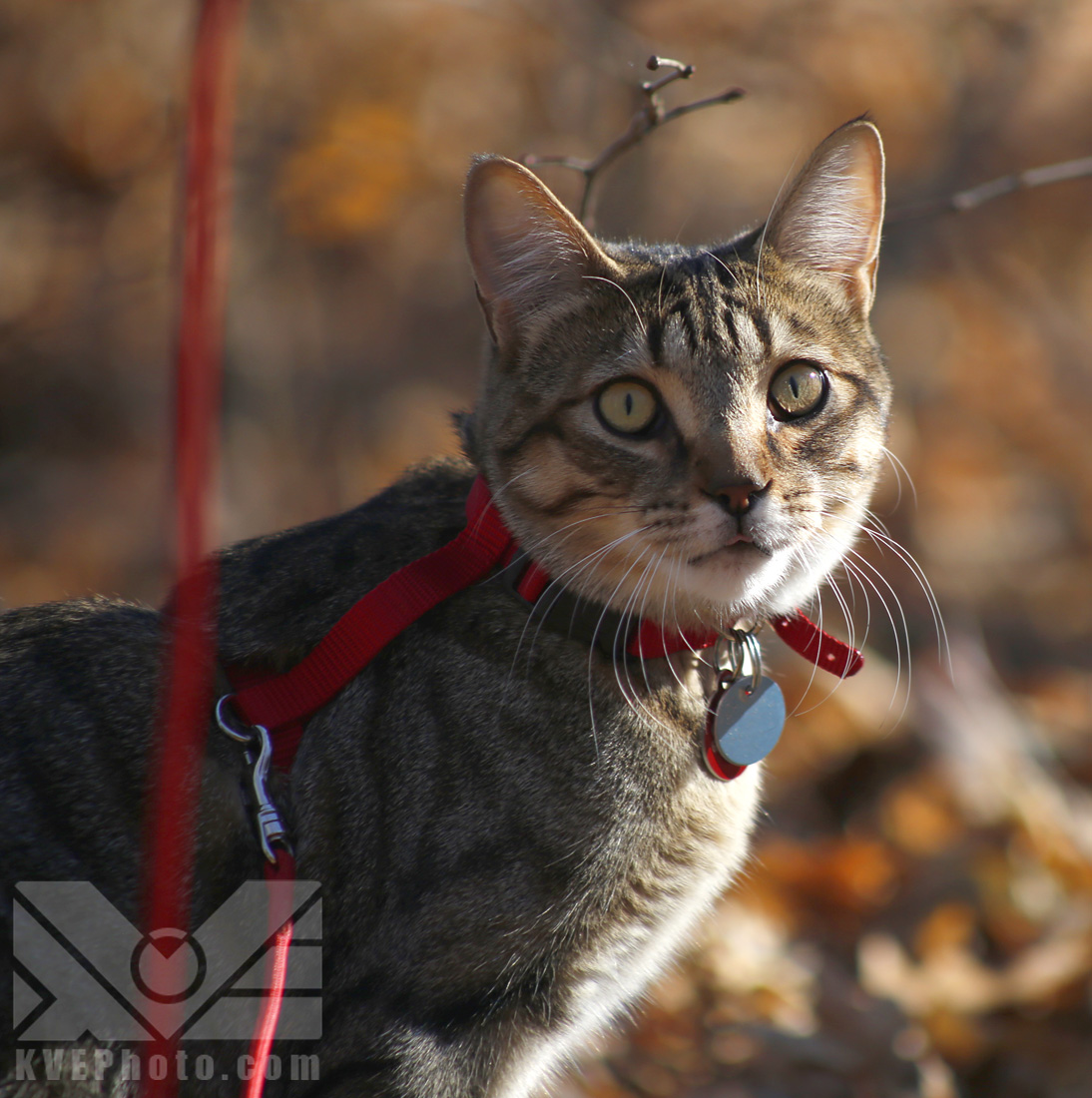 If you’re wondering about the bokeh in these shots, I made it in a slightly different fashion. It’s a lot easier to get blurry bits in your photo when you have a zoom lens. Basically, the farther away one part of the photo is to your subject, the blurrier you can make stuff.

While I do like the pleasing blurry bits in these shots, I like the warm autumn light even more. 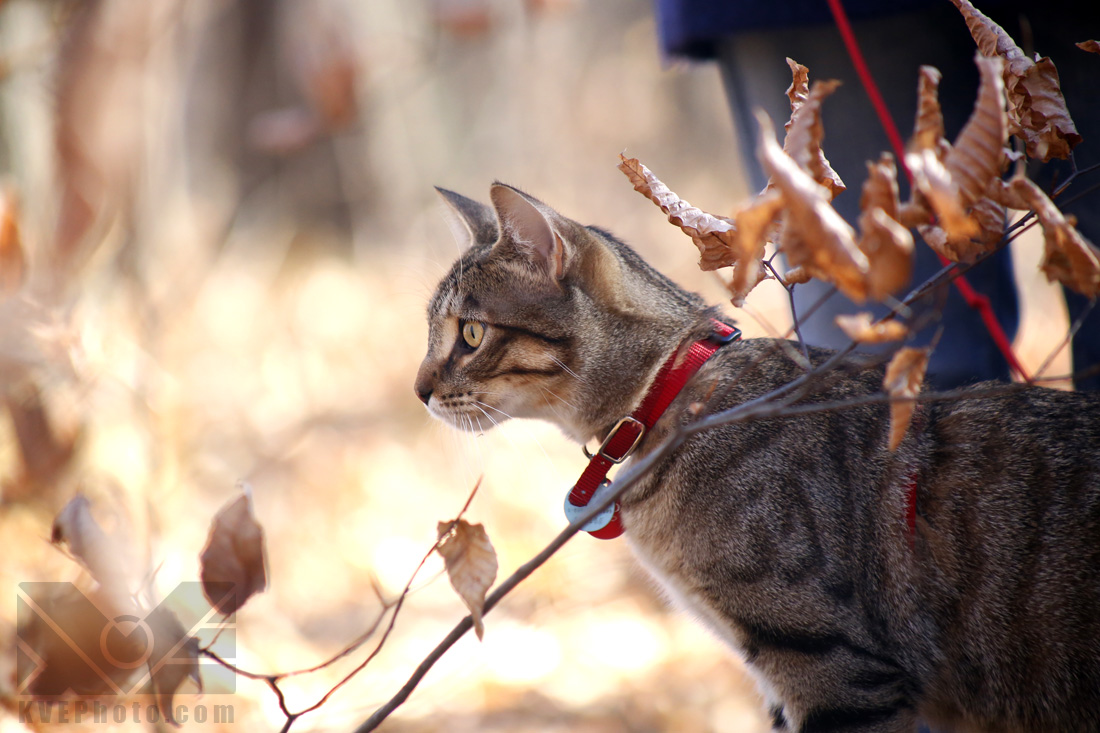 So here is our nearly grown-up kitty, being fierce in the forest. He’s very dear to us, and I know that these photos will be very important to us as he continues to grow. 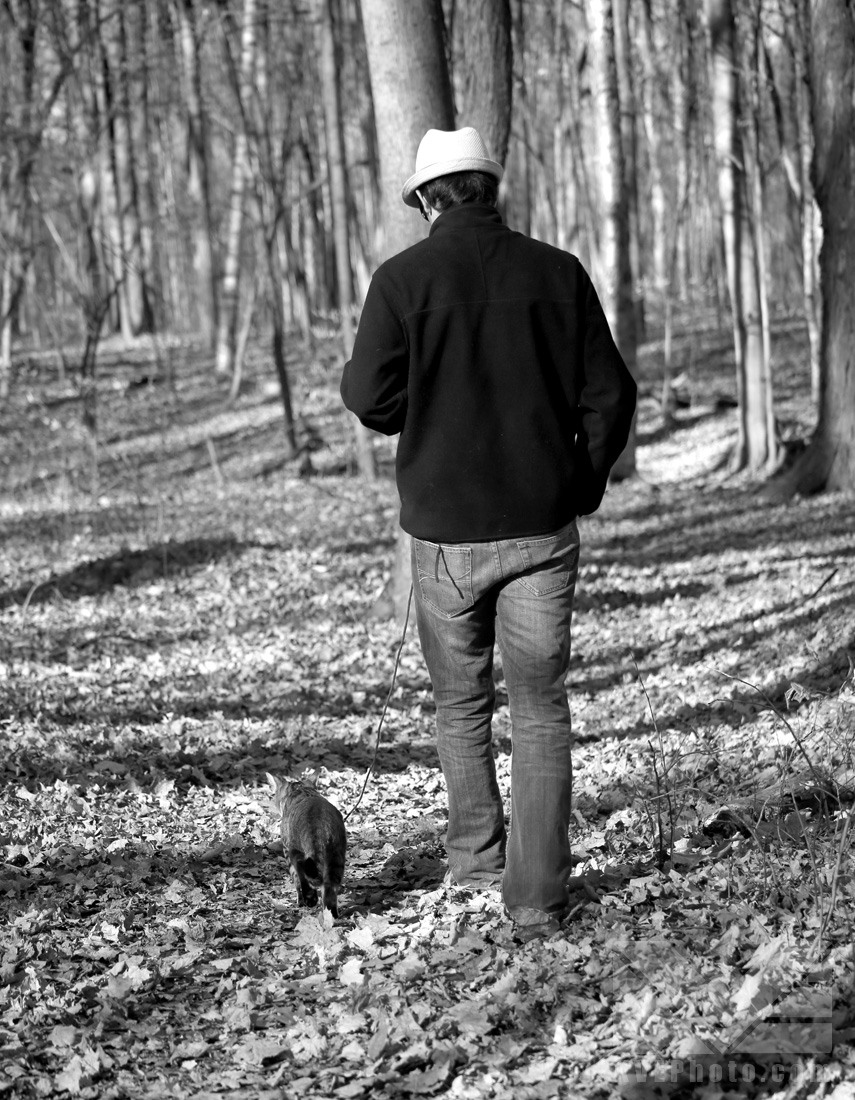 For it seems that a cat, when the mood suits him, can be a good walking companion too 🙂

So there are our ‘before and after’ kitty shots. Hope you enjoyed them! Feel free to check out my past posts or galleries for more tips and cool lookin’ stuff!

Thanks for checking in 🙂